Two original bars + a replica of the famous Sloopy Joe's Bar made in Colombia! Ernest Hemingway already said: "My mojito in La Bodeguita"! Come taste it too! Next to mojito, the bartenders will mix you more than 150 types of short and long drinks.

In our menu you will find many typical specialties, including seafood, fish, vegetables, meat specialties and original side dishes, you will not find anywhere else. We cook only from fresh ingredients, taking into account the seasonality of the ingredients. You can go to the lunch menu of non-traditional tastes every day. And if you get "night hungry", you will be pleased with the opening hours of the kitchen - every day from 11:30 am to 11 pm.

You can enjoy a live Cuban band and latino dancers every night, it will stir your blood in your veins for sure. At the beginning of the week, it is usually empty elsewhere, but with us, entertainment is the order of the day. Come and see for yourself! 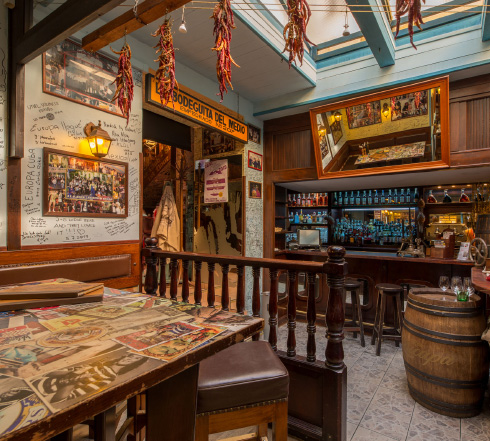 Basement:
La Bodeguita del Medio - the lower part of the restaurant offers a separate space for your private events and parties, in case of interest you will not be disturbed, but if you like you can visit upper part and dance as you like.

Cigar shop – buy a first-class cigars from around the world, courteous service is here to advise.

Cigar Club – place for your private meetings, where you can forget about the hustle of the city with a cigar, or with glass of premium whiskey in your hand, the possibility of membership in Cigar Club which brings many benefits. 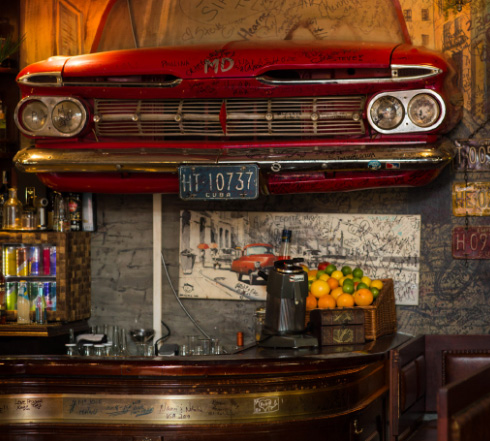 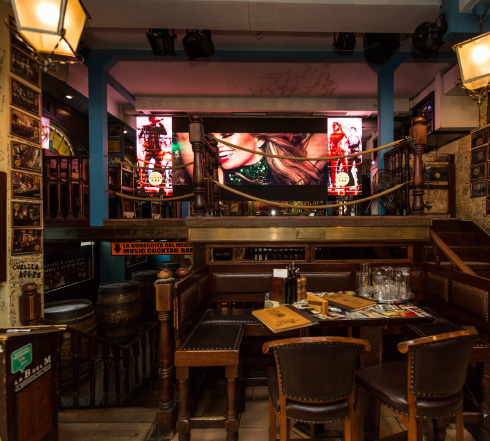 lives since its opening in 2002, very rich social life, and therefore it is possible to meet many a familiar faces. Here conects the smell and taste of Cuban dishes, juicy steaks and fresh fish, Caribbean cocktails, aroma of Cuban cigars, Cuban rhythms, along with a genuine atmosphere of one of Havana's most famous pubs, whose fame already crossed the border of Cuba.

• has an unmistakable character of the interior

• creates an atmosphere of undying fame of its predecessor from Havana

• its interior abounds with many artifacts not only from Cuba, but also from other exotic countries

• Bodeguita walls are dotted with a variety of paintings, photographs and signatures of guests

• all furniture, two separate bars, including several humidors, it all comes from Colombia

• inner part of Bodeguita is divided into several separate spaces

Each place in the world has something to pride itself on or at the very least, which sets it apart from everywhere else. The Cuban metropolis Havana is certainly no exception to this rule. That said, you will be hard pushed to find any other venue in the city boasting such a long and rich history and with so many famous guests on its books as La Bodeguita del Medio on central Empedrado Street which truly unites the colonial past with contemporary life.

For some reason unbeknown to us, it is said that the Bodeguita stands at a distance of one hundred paving stones from the largest American Baroque building in Cuba, which if tested, unarguably proves to be Havana cathedral. In 1950, La Bodeguita del Medio restaurant (which in Spanish means pub in the middle of the street) first opened its doors at number 207, Empedrado Street. To most of us, this choice of location might appear quite logical, however in fact the preferred “strategic point” for restaurants and bars is that of a street corner.

altAs you enter the Bodeguita (in Havana) for the first time, your olfactory senses will revel in the delightful aroma of Cuban mint, while sampling the special herbs apparently does wonders to your digestive system. Thus, these inseparable ingredients became the rudiments of the famous drink we now know as MOJITO, whose current form and taste were developed right here in La Bodeguita. At the back of the Havana Bodeguita restaurant, guests have the chance to try excellent Cuban cuisine, while at the same time sit back and take in the sounds of traditional melodies sung by a Cuban trio.tria.

Let us now return to the war-torn years of the twentieth century, looking, in particular at the year 1942, when Angel Martinez Borroto finally gave in to the powers of his entrepreneurial intuition and bought a small shop in the still fortified historical part of the city. Soon after embarking on this business venture, he set about managing and developing his small enterprise, going by the name La Casa Martinez. Shortly afterwards, Felito Ayon, a man of similar character to Martinez, set up his own printing shop nearby. For some time, the establishment had no telephone line and so, customers would occasionally wander over to the Bodeguita to settle business over a glass or two of rum.

altAmong the most prominent regulars to frequent the Bodeguita at the time, were the classic Cuban poet Nikolas Guillen and the notable prose writer Alejo Carpentier. Gradually La Bodeguita established an impressive clientele base proving a popular choice for intellectuals, artists and simple Bohemians alike. Indeed, over time, the Bodeguita became a forum for progressive thinking intellectuals (arriving from Latin America as well as the wider word) to meet and discuss.

During the first stages of its operation, visitors’ indulgent behaviour was confined to the bar. Some time later, however, the guests (usually friends of Martinez) could also sit down to eat. Initially meals were only available to family members and the sparse waiting staff, prepared by Martinez’s wife, nicknamed “Armenian girl” (presumably for her dark skin tone). At this time, the main ingredients comprised a combination of black beans and white rice, or as it was more often referred to: Maoris and Christians, or simply “CONGRI”. To finish off, guests were served pieces of baked pork, called “Masas de puerco fritas” and either fried banana chips or small banana pancakes, referred to by the locals as “Tostans de platano.”

Martinez was clearly devoted to satisfying the requests of his most trusted customers and subsequently began serving food, despite the fact that people only paid for the drinks.

altIn 1950, the title of Martinez’s enterprise was changed indefinitely from La Casa Martinez to the name that regulars had been using for some time: La Bodeguita.

This same decade also saw the arrival of a new wave of clientele coming from all over the world, including the likes of the American singer, Nat King Cole, Nobel prize winner for literature Ernest Hemingway, the idols of female beauty Brigitte Bardot and Sophia Loren, the American actor Spencer Tracy, not to mention Errol Flynn, Austin Lara or Mario Moreno. Together with their Cuban intellectual counterparts, these names have attracted a constantly growing number of dedicated visitors.

Today La Bodeguita del Medio serves as an unfading reminder to its Bohemian past where guests, whether intellectuals, politicians or passers-by continue to meet and while away the time.

As to the colonial building of the Bodeguita, dating back to the end of the 19th century, many visitors believe that the collection of invaluable signatures, memories and photographs preserved on the stonewalls deserve to feature in the Guinness book of records.

Let us now move on to the history of the Prague Bodeguita, established on 17th December 2002 - 60 years after the opening of the original Havana restaurant.


Your email was successfully registered.

For final activation of newsletters please confirm validity
your email address in email that we send you..